Performing Medieval Music is fraught with difficulties (notation, musical instruments, etc.). As a consequence, this repertoire was largely ignored in France in the 20th century until the nineteen-seventies. In the early nineteen-eighties some musical groups decided to play medievalpieces, especially from the 14th and 15th centuries, mixed with Renaissance and even Baroque pieces. These groups were influenced by traditional music, and since they knew little about the Medieval period and especially about its musical rules, their interpretation was often wrong. From the beginning of the twenty-first century, the interpretation has evolved with the help of scholars who worked on the music and on the theatricality of the medieval repertoire. Then, some artists and groups have developed performances blending music, dancing and acting in order to recapture the medieval spirit.The most interesting experiments carried out so far are certainly those by Benjamin Bagby and Katarina Livljanic.

This paper deals with the stage and musical production – mainly the fourth album Pamela Peacemaker – by Les Elles, a French contemporary female band who released and performed songs between 1995 and 2012. Influenced by French realistic songs, jazz, classical and electro music, their hybrid, original work offers a strong theatrical dimension which is worth exploring, in the writing of the songs themselves – both lyrics and music –, in the conception of the album, and in the live performances.

This theatrical dimension, which rests mainly on the dramatic quality of the writing, the Brechtian epic treatment of the various characters and stories created, the description of dark social realities and the dual actor/singer performance, is both groundbreaking and far-reaching. It can be assumed that Les Elles, whose work has turned out both experimental and popular, have created a new specific way – not only in the field of theatre but also regarding the political, feminine and queer scenes – of producing and performing songs on the French musical stage.

In popular music, performance is at the centre of both creation and communication and it also questions the notion of interpretation. One of the most important vehicles of this music is undoubtedly the body of the singer but also that of the other instrumentalists (such as guitarists). The popular music scene owes part of its revival to bodily gestures closely associated with music, texts, circumstances, setting the stage for a certain amount of theatricality within the concert.

This paper explores the performative dimension of the singer’s body in popular music, mainly focusing on gestures, bodily attitudes, embodiment of the characters, narrative processes, but also taking into account such stage devices as light and setup. The study is based on three examples from the French and international scene : Marilyn Manson, Amy Winehouse and Noir Désir.

The word “spectacular” is no longer used in theatre studies as well as in the area of artistic productions, the notion of entertainment that it conveys being left aside as superficial. Focusing on two scenographies designed by Robert Lepage for Peter Gabriel in 1994 and 2004, this paper aims to show that this “spectacular” dimension is part and parcel of a long history of shows. This tradition is now reconsidered by cultural studies which throw further light on the taste of the audience as central to its history.

Since the crisis of the music industry at the very beginning of the 21st century, the boundaries between the figure of the artist and that of the listener have gradually been blurred. In order to keep control of these new developments both economically and artistically, the star system has been offering more and more powerful musical experiments to the audience. The peculiar quality of these experiments largely rests on the theatrical and digital devices involved which are closely dependent on each stage setup. This paper aims to show how the dimensions and arrangement of each venue bear on the conditions of musical experience. 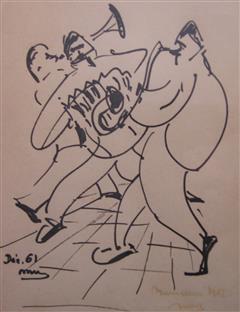 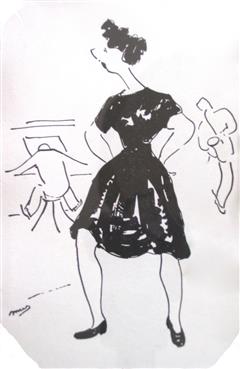 Baz Luhrmann is really interested in the theatre, as is shown by the title of his trilogy « red curtain », composed of Ballroom dancing (1992), Romeo + Juliette (1996) and Moulin Rouge (2001). In this work, freely inspired by the novel La Dame aux camélias by Alexandre Dumas, the music, linked particularly to such performing arts as dancing and the theatre, plays a major role. It is mostly based on rewritings of popular songs. Moreover, the construction of the film rests on variations of the « mise en abyme » of the script written by Christian, the protagonist in the film, and the entire film itself. In this film, music is really considered as one of the most important characters. And at the end, the representation in the film is « spectacular, spectacular », just like Luhrmann’s film itself. The peculiar and original style of Luhrmann, based on a hybridization of genders, is really outstanding in the cinematographic art. 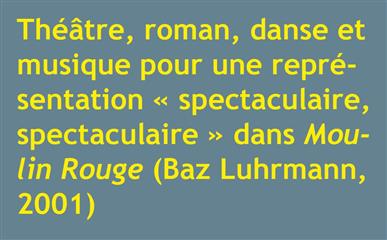